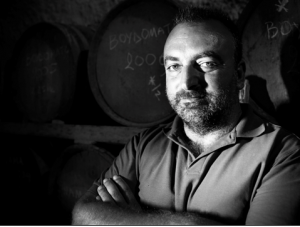 Originally from Crete, Haridimos Hatzidakis came to Santorini after graduating from the Technical School of Wine and Beverages in Athens where he studied agronomy and oenology. After graduation and beginning in 1991, Haridimos carried out an internship at J. Boutaris and Sons, where he eventually became head oenologist at their Santorini winery, while also being in charge of production at the Fantaxometoho Estate in Crete.

At J. Boutaris and Sons Haridimos met and married Konstantina Chryssou (originally from Santorini), who was working as their Director of Hospitality. Together they started their own winery in 1997 using Kostantina’s family’s vineyards in the village of Pyrgos Kallistis, on the road that leads to the monastery of Prophet Ilias. The land had not been cultivated since 1956, when the earthquake on Santoini forced her parents to leave the island for some time. After extensive re-palnting and nurturing of older vines, they converted a cave on the outskirts of Pyrgos Kallistis, into their winery.

Hatzidakis Winery has come to be known over the years as Santorini’s answer to a cult winery. The style of the wines have always gravitated towards the pure and powerful, foregoing pure reductive winemaking which has become the international face of Santorini for more authentic and terroir driven expressions. Indeed single vineyard bottlings from the Louros vineyard nestled between the villages of Pyrgos and Megalochori have set Hatzidakis Winery apart for their exploration of the terroir tapestry of Santorini which was once assumed to be homogenous. Additionally, Hatzidakis has further distinguished himself by being the first to bottle monovarietal wines of the rare Aidani (2000 vintage) and even rarer Mavrotragano (1997 vintage simultaneously with Domaine Sigalas). 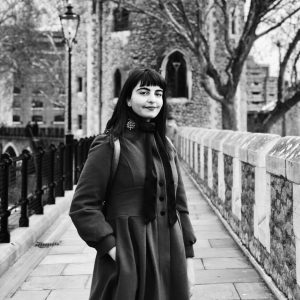 In the summer of 2017 Haridimos Hatzidkais died tragically, leaving the winery in the hands of his 3 children, the oldest of which, Stella, decided to continue moving forward and expanding on the important work of her father. The winery now currently has an all-female team of oenologists headed up by Helena Alevra who worked with Haridimos back in 2008 and Stella Papadimitriou who worked with him during the 2016 vintage, a team which is uniquely acquainted with the style and history of the wines produced there.

Today Hatzidakis Winery is expanding out of its “garagiste” beginnings with the completion of its new winery, a series of tunnels buried into a cleft of a ravine in Pyrgos on the way to Megalochori. Their production still remains small, with a scant 200-300 cases per vintage of most of their cuvees coming to the U.S. Hatzidakis Winery continues to both push the envelope on the exploration of Santorini’s rich patrimony of varieties and mico-climates while retaining a strong connection to the stylistic heritage of the island’s wines.