Bastian Jolivet of Domaine Jolivet is a budding star in Saint-Jean-de-Muzols, Saint Joseph which is part of the original 6 communes delineated in 1956 before the appellation was expanded in 1969. The domaine began in 2014 when Bastian, who recently returned from his various internships locally and abroad (Domaine du Monteillet in Condrieu, as well as further afield in New Zealand and South Africa), decided along with his father to stop selling the fruit from their 10 hectares to the local cooperative and bottle their own wine. The wines won immediate recognition, culminating in Paris with the award Grand Prix “Discovery of the Year 2020” by the Review of the Wine of France for best new winemaker. While visiting Bastian at the winery and walking through his pristine vineyards which hug vertically up the granite hill of Saint-Jean-de-Muzols, he confided that he suspects a great many of his vines, some of which are up to 75 years old and go into the ‘Cuvee 1907’ are actually Serine rather than Syrah and he hopes to begin genetic testing to determine the genetic composition of his vineyards. About 1 hectare is committed to the white variety Marsanne and a tiny amount of Roussanne round out the estate. 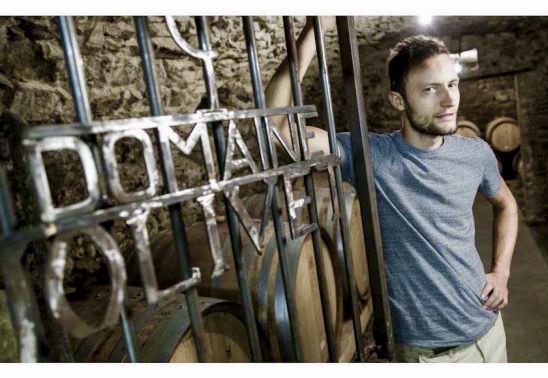 Farming is sustainable, with 2/3rds of the 10 hectares being handled organically (the steepest gradients being the hardest to assure pure organic cultivation in some years) but Bastien’s aim is to work towards a complete organic certification in the future. The winemaking harkens back to the old days of the Rhône when blending was the norm. All of the little plots running up the hill of Saint-Jean-de-Muzols (about 3 hectares of which are on the steepest part of the hill) are picked and vinified separately. Fermentations are done spontaneously. The wines are raised in a combination of 228-liter barrels and 600-liter demi-muids with over 90% of them being used. The assemblage is done just before bottling with some time for the wines to knit together. The wines are not fined and only filtered minimally with SO2 kept to a minimum. The wines have amazing lift, great nuance helped by the 40%-70% whole cluster depending on the cuvee, and impressive depth. Wonderful things are afoot in the northern Rhône by a new generation of winemakers and Domaine Jolivet can be counted among them or indeed at the very vanguard of the movement.