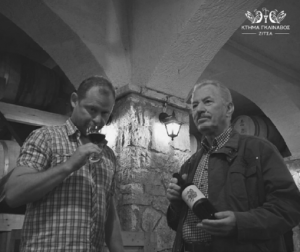 Lefteris Glinavos was part of the wave of boutique vintners that were instrumental in changing the entire face of Greek wine‐making during the 1970s. At the turn of the 19th century Greek wine was dominated by large scale bulk‐wine companies who purchased fruit from local growers without much care for quality. This state of affairs held steady until the late 60’s and into the 70’s as group of young wine‐makers‐‐whose own background in wine came from simple, village level production‐‐started to travel abroad for their vinicultural education and return to Greece to begin projects that were what we understand today as “boutique wineries:” small scale operations whose whole purpose was to explore the furthest reaches of quality in their respective areas.

Lefteris, for his part, chose Bordeaux as his educational destination and after completing hisstudies, traveled back to his native Epirus in 1978 to begin Domaine Glinavos in the hopes of marrying the traditions of his local wine producing region with the best of what, at that time, modern wine‐making could achieve. 37 years later Domaine Glinavos is now under the supervision of Lefteris’ son, Thomas Glinavos. They own 20 hectares of vines in multiple plots sprinkled among the high perches of the appellation of Zitsa in Epirus. Domaine Glinavos is in a semi‐mountainous region whose overall feel is more reminiscent of Austria or Switzerland than Mediterranean Greece. Limestone soils and mother‐rock create finely delineated wines of bright acidity and lacy minerality. Cold winters and cooler summers produce wines that struggle to reach 12.5% ABV.

Working with the indigenous varieties of Debina, Vlahiko, and Bekari, the Domaine’scobjective continues to this day to be to showcase the best of what these specific varietiesccan achieve when handled with the care and attention afforded to the other great regionscand varieties of Europe.