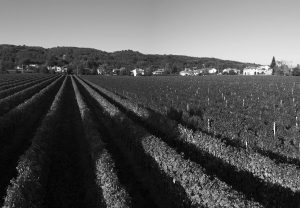 The Pozzobon family of Case Paolin has tasked themselves with bringing the Asolo Prosecco DOCG to the forefront of quality and purity within the region. Emilio Pozzobon purchased the estate in the early 1970s where his father and grandfather had been sharecroppers, shifting the family’s agricultural focus from silkworms to viticulture.  Since then, his three sons—Diego, Adelino, and Mirco—have taken over the operation, each shoring up a specialty suited to their own strengths. Diego oversees vineyard management, Adelino manages the cellar, and Mirco serves at the oenologist and technical director. The brothers work organically and with a keen eye on quality.

They incorporate two main areas with distinct soil type for their production, one in an alluvial plain that was formerly the bed of the river Piave characterized by gravelly soils, and the other the red, iron-rich soils of the hills of Montello. In an area that is often characterized and dominated by bulk production, the Pozzobon brothers work instead towards wines of purity and finesse, often cropping at yields that are nearly half of what the appellation permits. Years ago, they started to phase out chemical intervention in their vineyards and started working more closely with the intricacies of each vintage’s challenges, achieving organic certification in 2012.

They offer a range of Prosecco for every occasion. The Treviso DOC is extra-dry, just on the cusp of brut in terms of dosage, perfect for the aperitif. The Asolo DOCG brut spends two months in tank under secondary fermentation, giving it a much finer perlage and creamy mouthfeel than many of its counterparts, which may finish the same secondary fermentation in as little as two weeks. They also produce a Col Fondo, an ancient style which means “with sediment” wherein the secondary fermentation occurs in bottle, and the wine is released prior to disgorgement, producing a rich, wild expression of Prosecco that is unique and exciting.