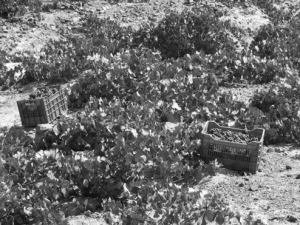 Although archeological digs in Akrotiri show that the history of vineyards on Santorini began at least 3500 years ago, it is difficult when speaking of Greek wine in general to find many current producers whose pedigree goes back further than the middle of the 20th century. This is due to the decimation of the wine culture by the Ottoman occupation which lasted for over 400 years, breaking the connections to the wine making traditions which had developed since antiquity. In the Koutsogiannopoulos Winery, which was founded by the brothers Georgios and Dimitris Koutsogiannopoulos in the late 19th century, we have one of the oldest continuously producing families in Greece. From 1870-1917 the bulk of Koutsogiannopoulos’ exports went to Odessa in the Ukraine. And while the Russian revolution in 1917 closed this chapter of exportation, the market opened up in France, Italy, and the rest of Western Europe. Today, four generations later, this winery continues to operate under the care and supervision of its present owner, Georgios Koutsogiannopoulos.

The estate vineyards of Koutsogiannopoulos Winery are comprised of 15 hectares of vines which continue to be cultivated in the traditional way of weaving them into the shapes of baskets or crowns. These vineyards lie in the areas of Vothonas, Megalochori, and Fira. Long term contracts with farming families on the island also bolster the amount of fruit available in this bare and sparse land. What makes the vineyards in Santorini unique is the volcanic soil on which they grow. The soil consists of white volcanic ash mixed with schist and limestone; it contains hardly any organic matter and is therefore poor in nutrients. The ash soil traps the moisture in the air during the nighttime and early morning hours, acting as a kind of reservoir, initially storing water and then providing necessary moisture to the vine. The combination of the especially hot and dry climate with the volcanic soil works to keep disease in check. Phylloxera cannot survive in the Santorini climate and so root stock is essentially original, with some of the oldest continually producing vines on the island estimated at 400 years old. 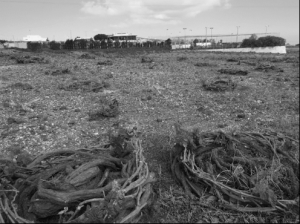 The predominant variety of grape on the island is Assyrtiko. It is distinguishable from Assyrtiko grown in other regions of Greece due to its high level of acidity and minerality derived from its terroir. Koutsogiannopoulos’ well executed Assyrtiko is a wonderful anomaly to the palate compared to other world class varietals, though it can be intensely yeasty with flint stone and honey, somehow saline characteristics, petrol; white pepper can appear, and finally, and most easily, citrus. This traditional rendition of Assyrtiko brings all of the pedigree of the varietal, terrior, and history of Santorini together flawlessly.